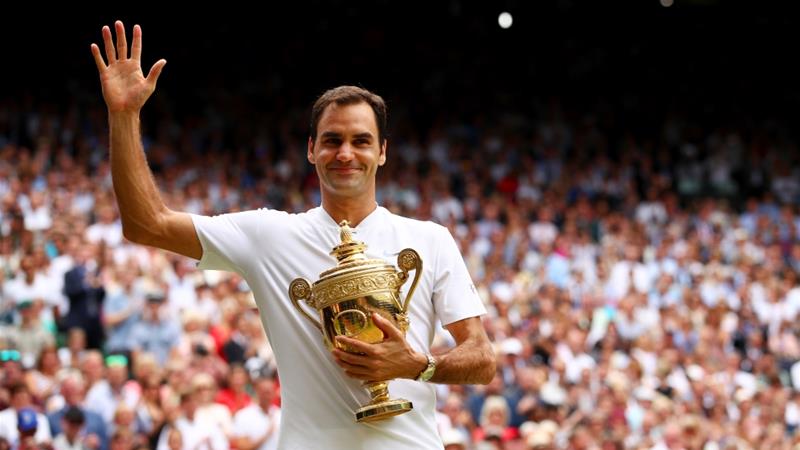 However, the Swiss superstar’s 11th Wimbledon final, and 29th at the majors, will also be remembered for the moving sight of the popular Cilic breaking down in tears after slipping 3-0 behind in the second set.
The seventh seeded Croatian, the 2014 US Open champion, sobbed inconsolably and buried his head in his towel as his title dream slipped away.

He had his left foot taped at the end of the second set, but it was in vain as Federer became the first player since Bjorn Borg in 1976 to win Wimbledon without dropping a set in the entire tournament.

“He’s a hero,” Federer said of his opponent.

‘I kept on believing and dreaming’
Twelve months ago, Federer was defeated in five sets in the semi-finals by Milos Raonic and promptly shut down his season to rest a knee injury.

“It’s disbelief I can achieve such heights. I wasn’t sure I would ever be here in another final after last year,” said Federer, who turns 36 in three weeks’ time and who has now broken the tie for seven Wimbledon titles he shared with Pete Sampras and William Renshaw.
“I had some tough ones in the finals, losing two against Novak (Djokovic).

“But I always believed. I kept on believing and dreaming I could get back.

“Here am I today with the eighth. It’s fantastic, if you keep believing you can go far in your life.”

Federer won his 18th slam in Australia in January on his return to the tour before adding the Indian Wells and Miami Masters back-to-back and a ninth Halle grasscourt title.

“I’ve got to take more time off,” joked Federer, playing in just his seventh event of the year.

Cilic, who had spent four and a half hours more than Federer getting to the Wimbledon final, said a blister that he first suffered in his five-set win over Sam Querrey in the semi-final was to blame for his troubles.

“I got a bad blister and fluid just came down under my callous in the foot,” explained Cilic.

“I still felt the pain. Every time I had to do a reaction fast, fast change of movement, I was unable to do that.”

However, Cilic explained that his courtside tears were for his emotional rather than physical pain.

“It was just that feeling that I wasn’t able to give my best,” he said.Miles Maclagan, ex-coach of former Wimbledon champion Andy Murray, told Al Jazeera that – even though Federer did not face any of the top four seeded players in this year’s competition – he is playing the best tennis of his career.

“He’s tactically the most astute, I think he’s moving as well as ever, and you could go back through just about every grand slam that’s ever been played and make excuses for people who were injured or didn’t quite play as well, or who weren’t at the top of their form,” he said.

“So in a few years we’ll look back, and we are just going to see Roger Federer’s name at least eight times on the winners’ board, and that’s all it will come down to.”