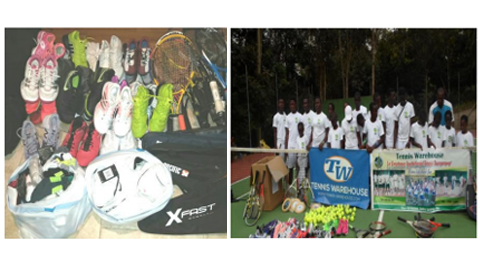 The Tennis Warehouse, the largest Internet based Tennis Outlet has donated a quantity of Tennis Items to the La Constance Tennis Center of Akropong Akuapem, Ghana, West Africa. The items included 25 Rackets, 30 pairs of sneakers and a host other tennis accessories; hats, bands, strings etc Donating the items on behalf of the Tennis Warehouse, Mr Don Hightower, the CEO said he was committed to Tennis Development in West Africa and finds the La Constance Tennis Center a novelty in the development of a Community based tennis program for Kids. Tennis Warehouse in the past has supplied similar items to the Center which enabled it to get it started The La Constance Tennis Center was established with a view to using Tennis as medium for Youth development and Empowerment and had done extremely well with about forty kids in tow. Commenting on the donation, Dr. Kwame Aniapam Boafo founder of the Center said he was extremely grateful to the Tennis Warehouse and that the donation have been instrumental in the sustainability of the program. He commended Mr. Don Hightower for his foresight and generosity and hoped others will emulate his commitment to this novelty in Ghana. He was equally thankful to Mr. Elliott Evazkhani of Tennis Warehouse who was instrumental in putting the items together He thanked other stakeholders who have contributed to the growth of the program, particularly the Coaches- Glenn Adu Adjei and Elizabeth Opoku as well.