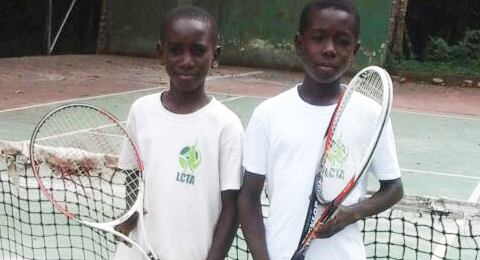 Two players of the La Constance Tennis Center at Akropong Akwapim were invited to join the National Squad at the recently completed MacDan Invitational at Accra
They are Kwasi Amoako and Eric Yeboah, shown in the attached picture. They were playing at the under 12 level
The La Constance Tennis Center was established as a community based program to use Tennis as a medium to train the children in community skills to enable them become effective members of community.
The program is free for the Kids
It was established as a collaboration between Kwakwaduam Association Inc of New York and La Constance Guest House and has done extremely well.
With partnership from some American Institutions, Tennis Warehouse, Solaris Tennis Club and Match Point Tennis, La Constance is well resourced
The Administrative Staff of La Constance, Glenn Adu Adjei and Isaac Offei expressed their confidence in the children and suggested greater things are yet to happen.
Dr Kwame Aniapam Boafo, founder of the program said he is extremely elated and pledged his continued commitment to make the program sustainable